A massive orange delivery truck barreled around the roundabout and came zipping toward the two of us as we stood on the side of the road, raincoats and backpacks on, thumbs held out expectantly. The van slammed on its breaks and jumped up onto the curb a little ways down the road. Natalia and I gave each other excited looks, and ran up to it as fast as our backpacks would let us.

“Where you heading?” The woman driving shouted at us past her driving companion. She was a proper-looking Viking woman, who easily filled her entire side of the van, and grinned at us with a toothy smile and bright eyes. “Glencoe? Aye! We’ve room in the back, but the doors a wee broken. Gotta climb up over the seats. Well, in you go!”

We climbed in, stepping our dirty boots right onto the seat as instructed, and climbed into the cluttered back seat of this once-delivery-now-vagabonding van, tossing our bags in beside us. The sliding door next to us did indeed look ‘a wee broken,’ with a rusty gap where the handle should have been and a plywood patch covering…well, covering something. We grinned at each other, searched for the not-to-be-found seat belts, and peered up over the high seats as the van lurched back into motion.

“I’m Lisa,” the driver bellowed, followed by a deep cough, as the van picked up speed. “And this here is my friend Lisa.” A pause. “We’re Scottish!” Lisa then released her laugh, which promptly filled the rest of the van.

We told Lisa our names—turned out the other Lisa (I’ll call her Lisa #2) was the quiet one of the two, and maybe said five words the whole time—and a little about our trip, but we didn’t get many words in before she was off again.

“Last hitchhiker we had was a bit hairy!” (It sounded like the word heady, in her thick accent). “A proper nightmare, he was! Very, very hairy!” At this point, I’m imagining a longhaired, bushy-bearded dude with werewolf syndrome shedding all over the van. I looked down, but there was not an unusual amount of hair on the seats. “You know that word? Hairy? It means sketchy. Off. Wrong. You know…haiiiiiiiiry!” She laughed again. We laughed too. We couldn’t help ourselves, her excitement and enthusiasm were downright contagious.

“He shoplifted when we stopped,” she told us. “And was drunk, drinking whisky in the back while we drove. Denied it when we asked him, but did he think we were daft? No, no! Then he was bleeding from his mouth, all over himself. Don’t know why. Agh, what a nightmare!” She looked in the rearview mirror at us, and coughed again. “We nearly didn’t stop for you, after him. But I hitched everywhere when I was younger, so I like to pick up hitchers. And you didn’t look hairy.” She gave us a scrutinizing look in the mirror again (must have been the matching hairbuns), and then grinned and laughed. Again, we laughed with her.

She then told us about her time on the road, when she was younger. She would hitch a ride to the next town, get a job where she could work in exchange for food and a bed, and stay there for a month or two and then move on. For fifteen years Lisa did this. And then she settled down and had kids (who she claims to have raised “wild”)—and does trips to the north with her friend Lisa and sometimes her sons, to spend time on a boat. Given the van experience we were having, I constructed a pretty good image of vacationing on Lisa’s boat. I bet it was a blast.

“Ah, Glencoe is great,” she continued, not skipping a beat. “There’s a waterfall there. I was with my boyfriend, and I woke up early, and I stripped down nude and I climbed the rocks next to the waterfall. And then, you know what? I looked down and there stood this cheeky hiker, with his camera out, snapping pics of me bum! Nothing I could do about it. I dove off into the water.” She chuckled. “Somewhere, there are pics of me nice lil bum out there. Huh. Cheeky lad.”

I must admit, it was very hard to picture the large lady in front of me climbing up a waterfall, or having what someone would describe as a little bum.

She then told us about Glencoe, and the mucky, swamp area near the road that was haunted and cursed. There had been a massacre there (we looked it up later…dang, it’s a brutal piece of history), and apparently Lisa and Lisa had walked through the swamp once, and fell into the mud up to their thighs. The mud, she said, was brown and red, from the blood of the men murdered there. Exaggeration, we were learning, was a favorite storytelling technique of our driver—but she told some great stories. 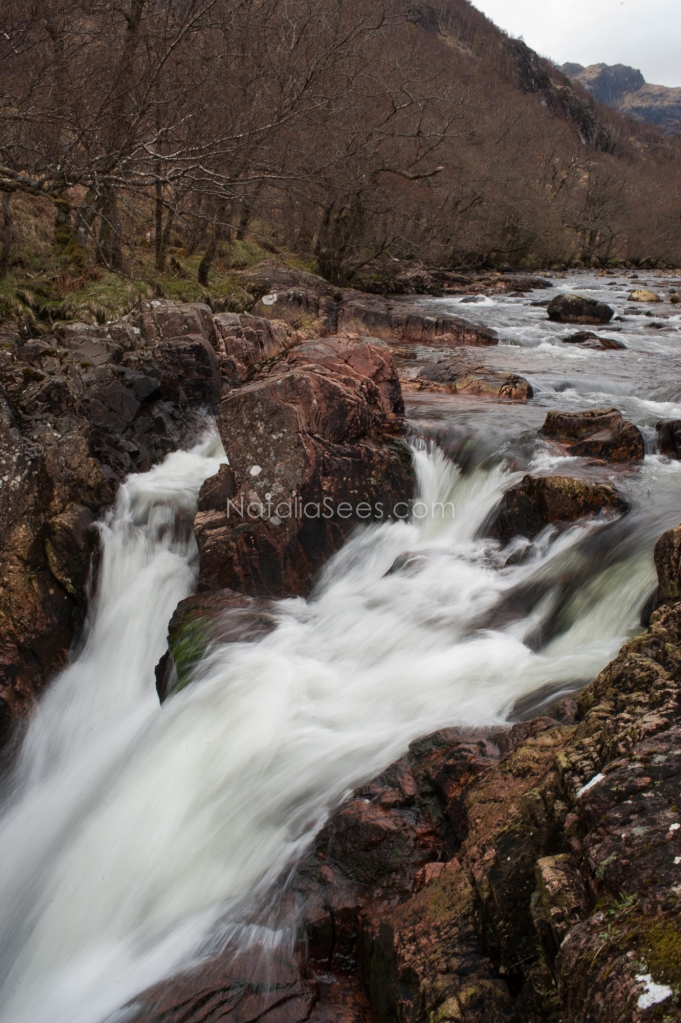 The ride to Glencoe lasted only 30 minutes or so, and we laughed the entire time. Lisa was excellent. She even put on a Southern American accent once that was impeccable, and had us howling. Stories of rough times on the boats, stories of her children climbing everything, and a few other stories of her going into the nature and taking all her clothes off. That last one was definitely a theme.

Our last taste of this hitchhiking experience was when we rolled up to the campsite we were to stay at, and, as we had come to expect to be the norm, it was pouring. There was a sign before the little hut that read ‘All vehicles must pay fee.’

“I’m not paying, ha!” Lisa shouted. She drove up to the hut and rolled down her window, only to get completely overtaken by a body-racking cough. “Excuse me as I choke to death!” she blurted out as soon as the cough subsided, and without breaking a breath, “Oh, hi doggie!” Well, as you can guess, she didn’t pay, and she dropped us off in the rain, and wished us well. Her parting words? “Stay away from the hairy Scots!”